This year marks the tenth anniversary of my sports writing career. I was hired at the local newspaper in January, 2006 as an editorial clerk and was quickly promoted to sports reporter.

The other sports reporter (who had been there longer than me by about a month) turned down a plum assignment covering one of the coolest March Madness stories in history. Ok, so maybe I am a little biased. Actually, it’s not just me, this great article talks about how the George Mason Patriots changed the game forever.

Anyway, I was fresh and hungry as a sports reporter and certainly did not hesitate to swallow up this opportunity. March Madness? Oh heck yea, I’m all in.

I prayed that night for God to help me do a good job. Then I did my research. The Patriots shocked the nation when they spoiled #1 ranked Connecticut’s dream in dramatic fashion and were heading to the Final Four, the biggest stage for college basketball.

Then I prayed some more. So the next morning I drove to George Mason University. Media were invited to watch practice and then the University was hosting a pep rally to send the boys off. My mission: to get a quote or two from the local starter and Aberdeen hero, Jai Lewis.

When I got there it was like a media frenzy. I had never seen anything like it. Major networks, ESPN, CNN. It was pretty crazy.

Honestly, I didn’t feel intimidated as much as I felt excited. I had a job to do. When Jai finished practicing, I, along with what seemed to be about fifty other reporters swarmed him. Once he stepped off that court, it was definitely on.

As tv cameramen and reporters got their sound bites, they moved away and made room for the print press folks. Eventually, I was able to ask my question. Then other reporters fell away and I asked him another question and then another, something about music and pregame.

I wanted to get him talking. I even asked him to clarify the spelling of Lil’ Wayne correctly for me. Was it Little Wayne as in L-i-t-t-l-e? He laughed politely. No it’s L-i- l. I laughed nervously and wrote it down as quick as possible. This ditty even made it into the story.

Eventually I made my way into the empty stands and sat, looking down onto the court. I was intoxicated! After a few minutes of taking it all in, I called my husband, Neil. We laughed together as I regaled my day. That’s so cool, he kept saying.

Then I called my father and gave him the same report. That’s fantastic babe, he said as only my father could. It was all I needed to hear. This was one of the most exhilarating times I had at the paper. I felt like a real sports reporter.

That weekend, the Patriots Cinderella ride ended as they lost to Florida (and ruined my brackets). Although their ride ended, their mark was surely made.

Fast forward a year or so later and Jai was playing professional hoops in, I believe, Israel. I kept up with him through Facebook and challenged him to a basketball shootout at the ESPN Zone. For some reason, I felt brave with all that distance between us and talked a whole lot of smack.

I got a couple of stories out of that for a local blog and ended up having a great dinner with some of his friends and my niece, Paula, who acted as my photographer. If memory serves correctly, I don’t recall embarrassing myself too bad against Jai (who was like 99% at the line back then).

Good times, indeed. Thank you Jai, for always being a class act! And just to let you know, I got the high score at the AMC Lowes White Marsh theater hoops machine before it broke down! (I still got it and will continue to practice for our next get together. FYI: Hoops is my favorite arcade game of all time.) 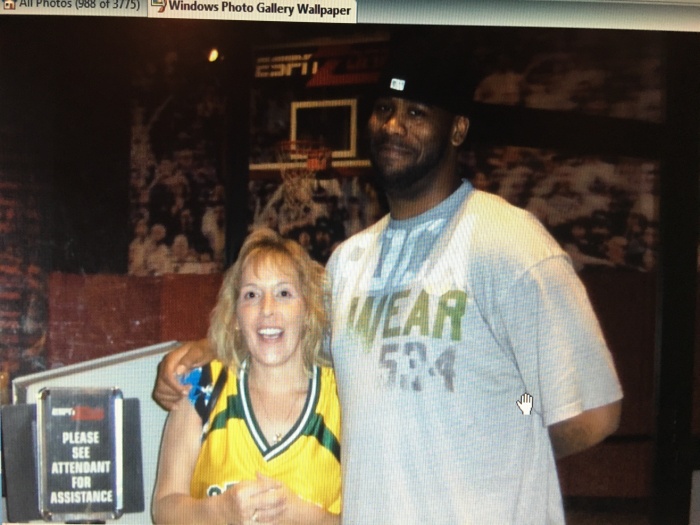 I can’t help but reflect on this story now and see how far I’ve come. It has been a wonderful and long, satisfying road. Have things always worked out? Not by a long shot. Has it been easy? Nope. Would I change anything? No way.

I can clearly see how God has worked his magic in my life. My mistakes and heart breaks have led to growth and faith. More trust. My successes have helped me take the next step and the next. I feel gratitude from both the good and the bad.

This path, at times felt shaky with anxiety, has been a marvelous journey for me. I could not have plotted it out better for myself if I tried. Not ever. It reminds me what I have always known but sometimes forgot: God has always had my back!

4 thoughts on “My March Madness Story”