This week I had the pleasure of attending the Fellowship of Christian Athlete’s (FCA) Victory Dinner. I’ve been lucky enough to attend this event for the past few years. It just gets better and better. And bigger too!

This year the keynote speaker was Baltimore Ravens running back, Justin Forsett. He did not disappoint! An excellent speaker with a positive message that was uplifting and powerful.

Forsett’s success has been peppered with its own unique kind of adversity. He’s been fired and cut and demoted again and again. Pretty much his entire career, through college and the NFL, he has been pigeon-holed. They said he was too small. They said they knew what he could do.

This just made him work harder in the shadows and wait; with God in his heart he knew he had the advantage. Eventually things turned around for him and he got his break with the Ravens. He has completed eight seasons in the NFL, two for the Baltimore Ravens.

Forsett was named to his first Pro Bowl in 2015 following his most successful season in the NFL. He rushed for over 1,200 yards and was named AFC Offensive Player of the Week twice during the 2014 season. Way to go, Justin! He’s just as fun to watch off the field as he is on it.

Also, our good friend and one of the most kind-hearted men you’d ever want to meet, Brian Donley, had a speaking role during the Victory Dinner. He did an exceptional job in front of the largest crowd ever hosted at Mountain Christian Church. (We all know how big that church is!)

I liked what Brian said in response to a mom thanking him for sending the Edgewood Rams football team to a football camp this past summer: thank you for being obedient, the mother said.

Brian said he never really looked at it in this way before. Being obedient. But nevertheless he asked us to think about it and  “be obedient” when it comes to our service.  Don’t listen to the little voice that cowers in fear but listen to that big voice that says what more can you do?

What a glorious night! The food, the company, meeting the younger athletes who benefit from this fellowship, the messages. Yes, the stories.

Here is one that will really get you. This nearly brought the entire room to it’s knees as it was told by an understandably choked-up Steve Medinger, the Northern Maryland Director of the FCA.

From how I understood it, a child from Edgewood was in extreme distress and ready to take his own life when an emergency FCA Prayer Huddle was called. That same child received a huge outpouring of love and support from social media and decided to give his life to Christ rather than take it. Talk about profound!

Steve said there has been at least three occurrences where the FCA has intervened and helped save lives. Is that not incredible? You can learn more information about what the FCA is and does here.

I found myself wondering and searching my own heart as I drove home that night. What more can I do? Because in our world today, things seem faster, crazier. Our children are pained and lost and need us more now than ever. There is a greater and greater need for fellowship, for love and compassion.

What more can I do? In my community alone, Joppatowne High School sports has not yet partnered with the FCA. That makes me wonder, why not? So I’m thinking maybe, just maybe if we are obedient enough together, we can make something like this happen.

All it takes is one student or one coach. 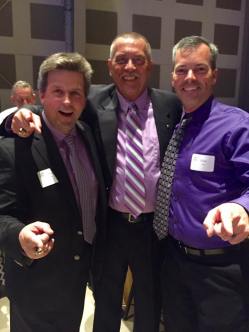 One thought on “The FCA’s Victory Dinner”